The second Rome E-Prix race saw Jaguar Racing continue their point scoring run with Mitch Evans finishing a solid sixth. The Kiwi qualified in twelfth and was able to slice his way through the pack, gaining six places. Evans made decisive overtakes throughout the race and showed the strong pace of the Jaguar I-TYPE 5. Sam Bird also had a good start to the day after topping group one with his Jaguar I-TYPE 5 in a rain affected qualifying session. Starting eleventh on the grid, the Brit demonstrated skills and speed throughout the race before the Safety Car was deployed with eight minutes to go. As the green flag fell for the final lap of the race, an intense one lap shoot-out ended when Nyck De Vries collided with Sam, taking them both out of the race.

Jaguar Racing secured their first double podium finish in 30 years with Sam Bird and Mitch Evans finishing second and third respectively at the Rome E-Prix. Mitch Evans also secured the fastest lap of the race with a 1:42.387 while Sam Bird achieved his first FanBoost with the British team.

Sam Bird carved his way through the pack from tenth and finished the race in second - his second podium for Jaguar in three races. The action-packed race, which started under the Safety Car, saw Sam overtake Sebastian Buemi as the green flag was waved - showing fantastic pace in the Jaguar I-TYPE 5. A number of clean overtakes and clever uses of ATTACK MODE allowed the Brit to move up to second before the race concluded under the Safety Car. Mitch Evans also executed an incredible drive through the field, gaining nine places from twelfth to third and securing his second podium of the season. He pushed through to take the final place on the podium while proving the speed of the Jaguar with the fastest lap of the race. 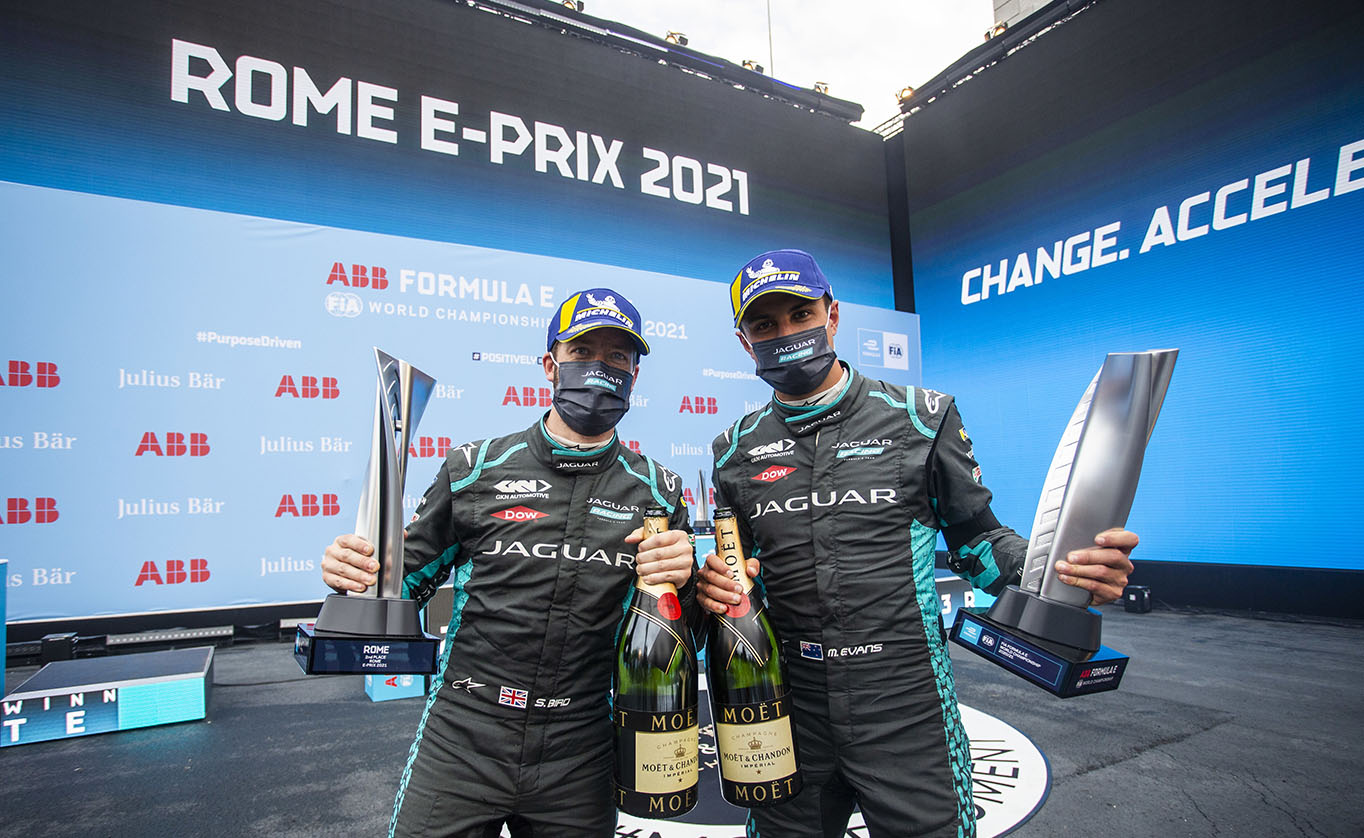 Jaguar Racing today returned to the podium at the opening race of season seven of the ABB FIA Formula E World Championship. New Zealander, Mitch Evans secured a third place finish after qualifying sixth. The Kiwi had a great start to the race, moving from sixth to fifth off the line. He moved into fourth position after Eduardo Mortara took ATTACK MODE and managed to hold onto the position by overtaking Pascal Werhlein. With two minutes to go before the end of the race, Evans made a decisive overtake on Rene Rast to secure a solid third and 15 points for the British team.

After qualifying eighth, Sam had a great start to the race and was showing very strong pace. With 25 minutes left of the race Bird had a collision with Mahindra’s Alex Lynn causing the team to retire the racecar ahead of round 2 tomorrow. 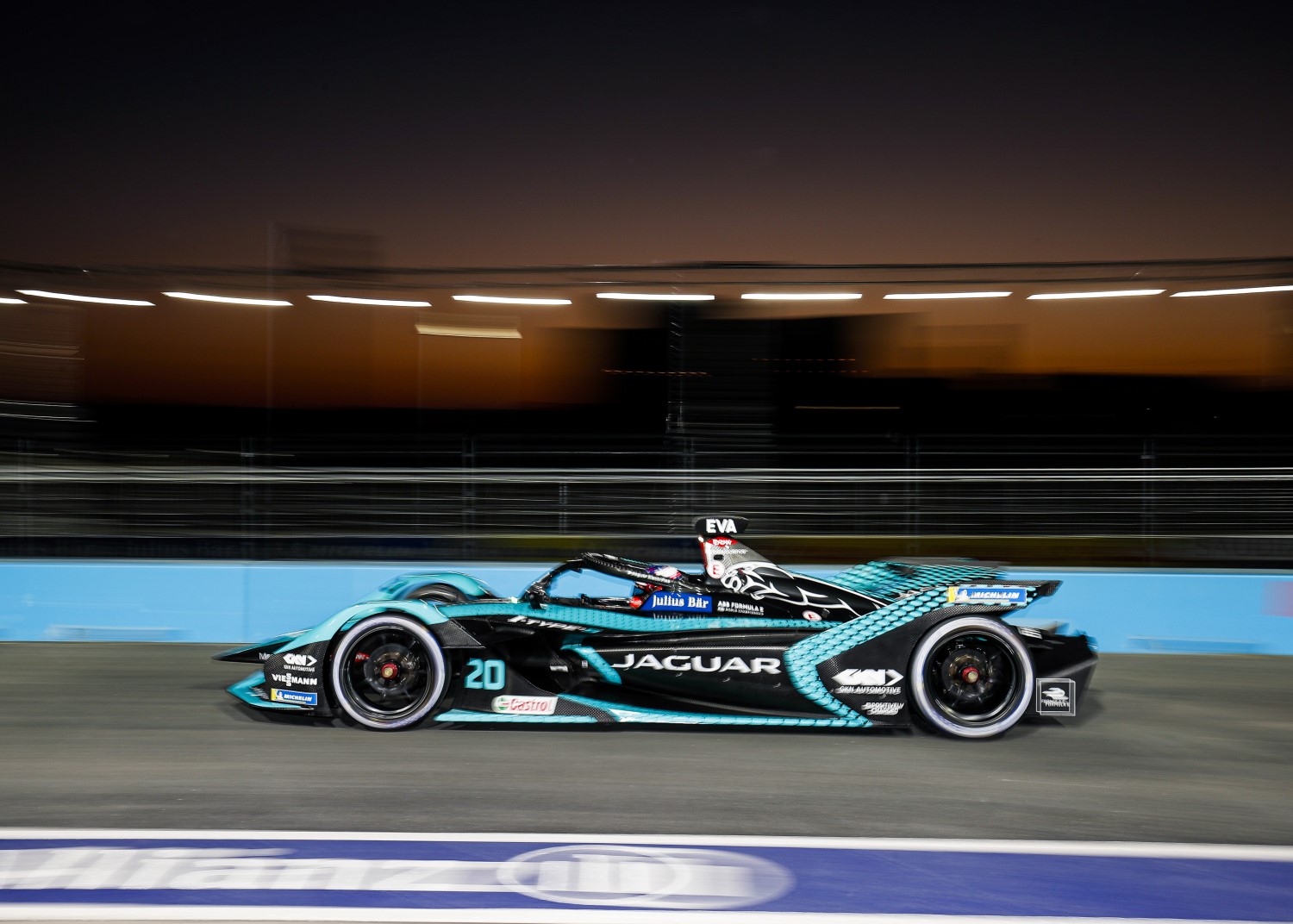 Sam Bird won the second round of the Championship under the lights of the streets of Diriyah. He started the race on the second row of the grid but made a decisive move and progressed into second at the first corner, overtaking Sette Camara. Bird battled with his old teammate Robin Frijns for the majority of the race – attacking and defending and showing the pace of the Jaguar I-TYPE 5. After multiple incidents, Sam followed the safety car for the last six minutes of the race before taking the victory under a red flag.

The second night race brought less fortune to the other side of the garage. It was frustrating day for Mitch Evans as he started in eighteenth on the grid after being held up by Oliver Rowland on his qualifying hot lap. The Kiwi did not finish after a collision ended his race.

The 2021 Formula E calendar has been updated, with a number of small changes being made for the coming eight dates. The two late-February dates in Saudi Arabia remain on the 26th and 27th, as does the 10th April date in Rome, Italy. The race in Paris on 24th April has been postponed until Season 8. In its place there will be a race in Circuit Ricardo Tormo in Valencia, Spain. Monaco remains on 8th May, however the race in Seoul, set for 23rd May, has been postponed. In its place will be a round in Marrakesh at Moulay El Hassan on 22nd May. Finally, dates of 5th and 6th June have been confirmed in Santiago, for a Chilean double-header.

GKN will play an important role in the electric powertrain development. Software engineers will be integrated into Jaguar Racing’s headquarters, providing extensive knowledge. The British team will utilise GKN’s expertise to develop advanced powertrain cooling technologies for both the inverter and electric motor in pursuit of enhanced system efficiencies. The partnership with Jaguar Racing will also feed into development of GKN’s world-leading eDrive technologies for electrified road vehicles. 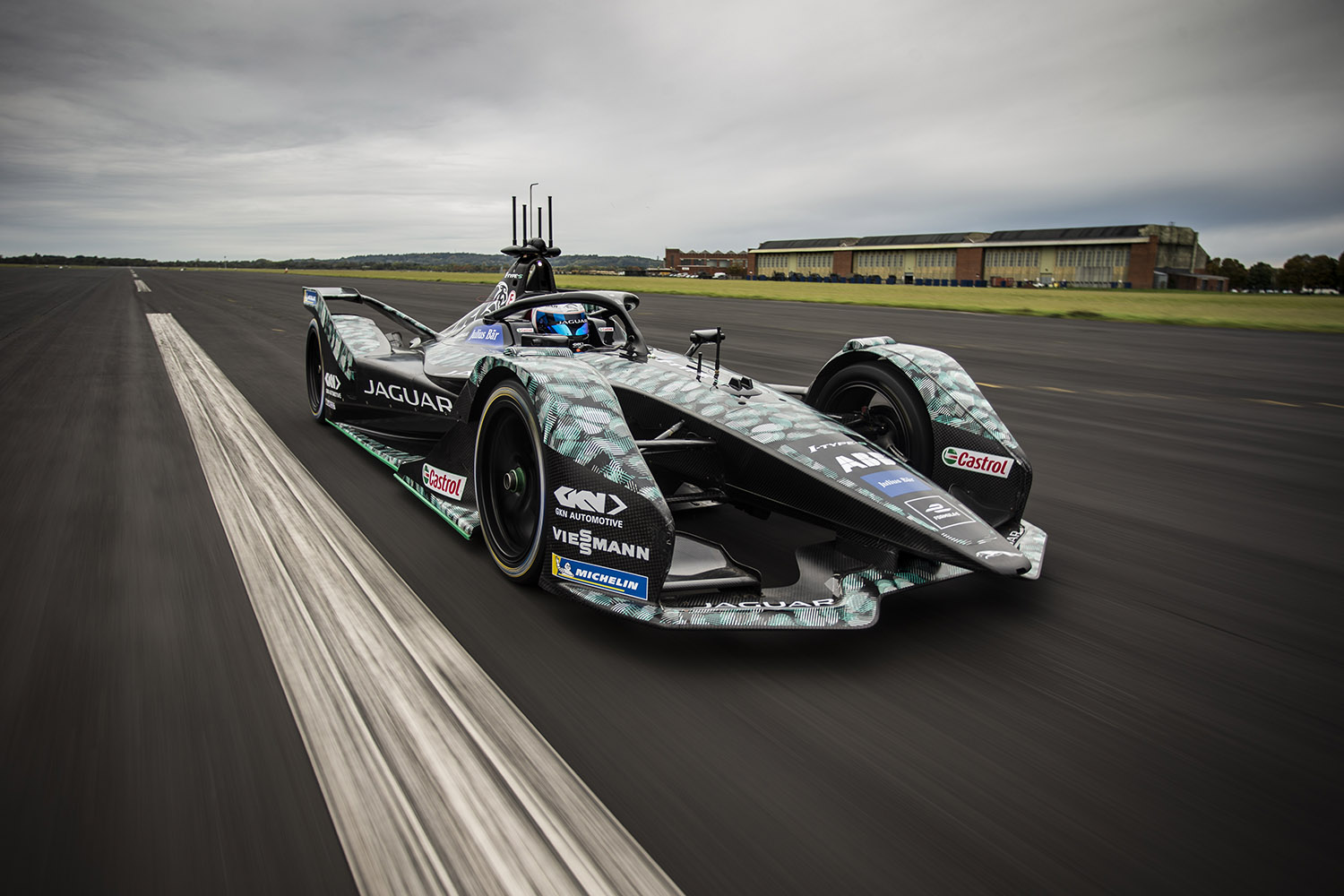 As a long-term team partner, the GKN Automotive logo will feature on the livery of the 2020/2021 I-TYPE 5. A camouflage development racecar made its debut with Sam Bird behind the wheel at a Jaguar Racing test in the UK earlier this week.

Ahead of season seven of the ABB FIA Formula E World Championship, Jaguar Racing have partnered with DR1VA, the leading motorsport lifestyle brand, to provide teamwear and fanwear.

DR1VA will support the team by providing all on-event clothing, apparel and travel kit for Jaguar Racing staff across Formula E. In addition, they will become the Official Licensee for Jaguar Racing replica teamwear, merchandise and fanwear as well as seeking relevant brand extension and licensing opportunities in motorsport related categories. The British brand, DR1VA, established by Innovation 1st Limited in 2018, was created to deliver a modern luxury fashion twist on motorsport lifestyle apparel. It is targeted at ambitious, driven individuals and takes its inspiration from racing drivers and partnerships such as this one, with Jaguar Racing.

Jaguar Racing have benefited from using Castrol e-Transmission Fluid to date, which has delivered a significant step up in performance, both for cooling and reducing friction losses. Together, the teams are currently developing a new powertrain fluid for coming seasons that will further improve performance through cooling and component design in the Jaguar I-TYPE. 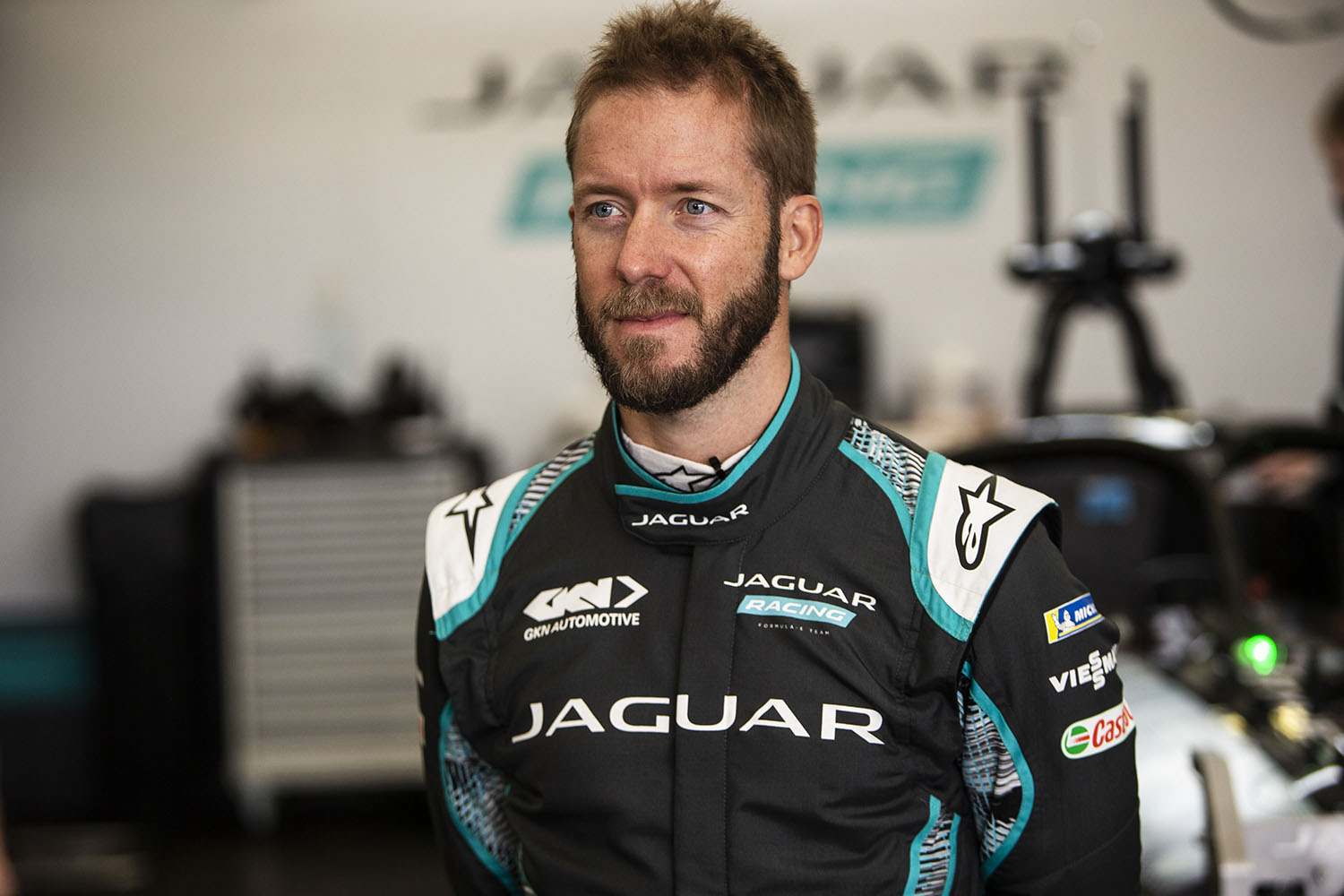 The 33-year-old has competed in every Formula E race since the ground-breaking series started in 2014, securing nine wins to date. Bird, who started his successful racing career in 2002, went on to forge a successful record of results in the sport’s junior categories before a number of key Formula 1 roles including testing duties for Williams and reserve driver for Mercedes AMG Petronas from 2011 to 2013. In recent years Bird has tasted success in the FIA World Endurance Championship with Ferrari and the G-Drive Racing squad. His first race for the team will be on 16 January 2021 in Santiago, Chile. 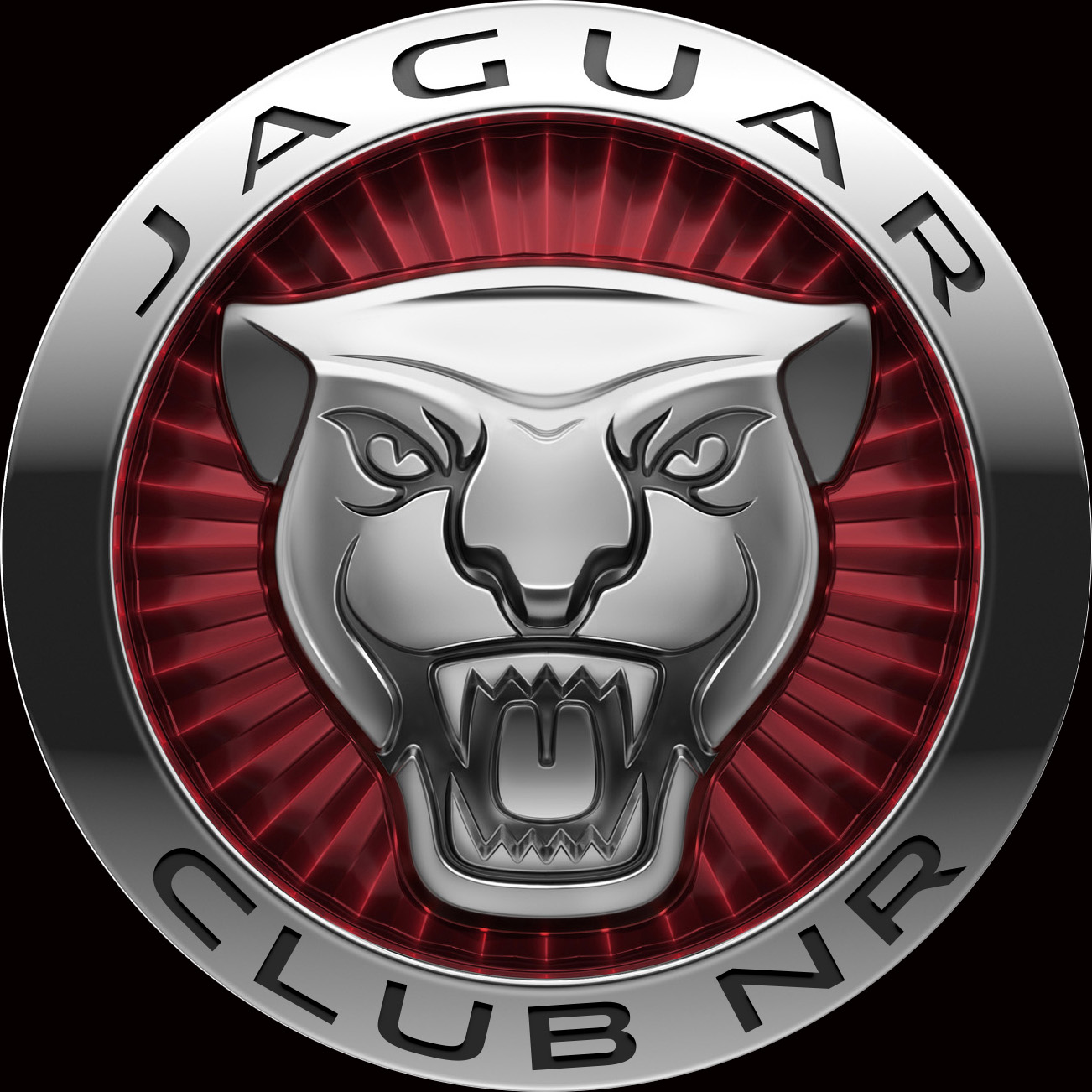