Mitch Evans (Jaguar TCS Racing) fended off the close attentions of Jean-Eric Vergne (DS TECHEETAH) and Edoardo Mortara (ROKiT Venturi Racing to take his third win of Season 8, at the inaugural Jakarta E-Prix. Evans made a late-race lunge that caught then-leader Vergne off-guard - an opportunistic move from way back. From there, energy management became increasingly critical for the lead duo as they fought between themselves and against searing track temperatures at the Jakarta E-Prix International Circuit, right by Ancol Beach. That allowed Mortara to join the party and look to pick up the pieces as Evans and Vergne squabbled. Evans had some five minutes plus added time to hold the pair off, with the race anybody's heading into the final turn and his rear tyres fading fast. The Kiwi did hold on, though, to head Vergne home with Mortara right with both of them - all three drivers within a second of one-another. 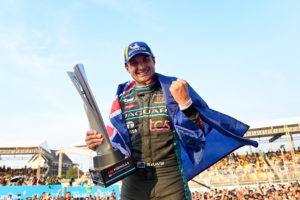 For the second day in a row Mitch Evans lined up in ninth on the grid, with teammate Sam Bird in fourteenth. Mitch held his position for the first ten minutes of the race before making an impressive overtake on Jean- Éric Vergne. The Kiwi fought hard to keep up momentum, but the abrasive track surface combined with heat of Berlin meant his rear tyres started to struggle and he began losing pace towards the end of the race. Mitch was able to keep fighting and finish the eighth round in tenth – the final point scoring position. Sam had a challenging opening few laps which saw him pushed wide and lose several positions early in the race. A solid energy strategy and an efficient Jaguar I-TYPE 5, enabled him to climb back through the field to bring his Jaguar I-TYPE 5 home in eleventh – just outside the points. 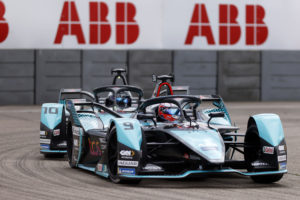 On the Berlin Tempelhof airfield, Mitch Evans and Sam Bird lined up ninth and fifteenth on the grid respectively after unfortunately missing out on the qualifying Duels. Both drivers performed impressive opening laps with Mitch gaining two places and Sam gaining four. Both showed excellent energy management during the race which allowed them to make key moves forward in the final stages. Mitch and Sam were able to carve their way into strong point-scoring positions with decisive, clean overtakes. They collected 16 valuable points for Jaguar.

In the final stages of the race, 27-year-old Mitch, made a bold overtake on António Félix Da Costa to bring his Jaguar I-TYPE 5 home in fifth position, demonstrating the efficiency of his race car. Sam Bird gained an impressive eight positions to finish seventh showing the race pace of the Jaguar I-TYPE 5 and a return to the points for the Brit.

Mitch Evans took his third Pole position in the ABB FIA Formula E World Championship and a second-place podium at the Monaco E-Prix for Jaguar TCS Racing. Mitch started the race at the front of the grid after a perfect qualifying session saw him top Group B and progress through every Duel to the Final.

Under the Monegasque sunshine, the New Zealander held the lead of the E-Prix for the first 20 minutes. Leading the pack and towing the field behind cost Mitch valuable energy which he was forced to recover during the second half of the race. Strategic overtakes using ATTACK MODE demonstrated the pace of the Jaguar I-TYPE 5 and Mitch was able to overtake Jean-Eric Vergne and take the second spot on the famous podium. Teammate, Sam Bird, narrowly missed out on a place in the quarter-finals by 0.01 second and lined up in thirteenth on the grid. The Brit’s bad luck continued with a small collision which broke the track rod and ended his race after 13 minutes.

Mitch Evans makes history for Jaguar TCS Racing as the first driver to win both races in a double-header weekend in Rome. He’s only the third driver in Formula E history to win an E-Prix on two consecutive days. Mitch Evans and Sam Bird lined up fourth and fifth on the grid respectively after a successful qualifying session.

In the first ten minutes of the race, Mitch Evans made a decisive overtake on Jake Dennis to move into a podium position. He continued to execute a flawless drive, overtaking André Lotterer and Jean- Éric Vergne to take the lead. The New Zealander tussled with the front runners for a number of laps before a late safety car was deployed. A late and fearless ATTACK MODE strategy coupled with good efficiency enabled Evans to regain the lead of the race and take back-to-back victories on the streets of Rome. Teammate Sam Bird, also had a strong race, and was set to score more valuable points for the team. Sam showed the exceptional pace of the Jaguar I-TYPE 5 before a collision while battling for position with Nick Cassidy forced him to retire in the final lap of the race. 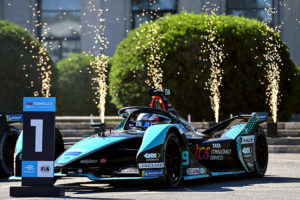 Jaguar TCS Racing win the fourth round of the ABB FIA Formula E World Championship in an action-packed Rome E-Prix. Mitch Evans secured a dominant victory on the streets of the eternal city, which has been a happy hunting ground for the team for a third year in a row.

Mitch started ninth on the grid, after a challenging qualifying session saw him narrowly miss out on the Duels. The Kiwi gained two places off the line overtaking both Porsches before a full-course yellow and safety car was deployed. When the green flag was waved, Evans continued to carve his way through the pack, making impressive overtakes to secure places while maximising on energy saving. With fourteen minutes to go, Mitch overtook Robin Frijns in the Envision Racing car to take the lead of the Rome E-Prix. and finished the race 5.7 seconds ahead of the rest of the field. Teammate Sam Bird executed a stellar race by carving eight places through the field to finish in P5 securing valuable points for the team.

Jaguar TCS Racing were looking set for a double-points finish with two laps remaining of the Mexico City E-Prix. A decision by the race leaders to extend the race by another lap meant the fearless energy strategy ultimately left both Jaguar drivers and a number of other teams with an extra lap to complete. As a result Sam Bird and Mitch Evans, who had fought through the pack, finished in P15 and P19 respectively.

Starting in P11 and P17 on the grid, New Zealander Mitch Evans and Briton Sam Bird collectively climbed 12 places into the points, showing the race pace and efficiency of the Jaguar I-TYPE 5. Evans capitalised on his ATTACK MODE early in the race, taking three places in two minutes while Bird also climbed inside the top 10 making decisive overtakes. A strategic decision from the Porsche team, who were leading the rest of the field, meant that the race went long and into an additional lap. This left the Jaguar TCS Racing drivers an impossible task to defend positions while trying to save enough energy to take the chequered flag.

Mitch Evans lined up on the grid in P16 after a challenging group Qualifying session where the Kiwi scraped the walls of the tight street circuit which damaged his steering and compromised his final run. Sam Bird also had an unfortunate group Qualifying session and was unable to complete a competitive lap after hitting the wall and damaging his rear suspension – he lined up P21 on the grid.

Mitch Evans and Sam Bird were both carving their way through the field in the race, gaining five places each and showing the speed and efficiency of the Jaguar I-TYPE 5. An aggressive strategy to save energy for the end of the race was thwarted by a crash from Mahindra’s Alexander Sims which brought out the safety car in the last five minutes. The race did not restart and chances of valuable points evaporated into the desert night. Mitch finished the race just outside of the points in P11, but the result of the late safety car meant the New Zealander was unable to take his second ATTACK MODE. He received a 24 second penalty and leaves Diriyah with a P21 result while teammate, Bird, finished P15. 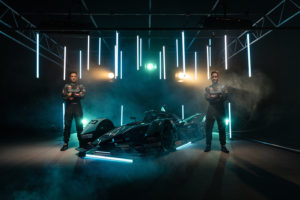 Jaguar TCS Racing score strong points in Saudi Arabia at the Diriyah E-Prix – the opening round of the ABB FIA Formula E World Championship. Sam Bird finished the race in fourth, narrowly missing out on a podium. Brit, Sam Bird, lined up fifth on the grid after making it through the group stages of the new qualifying format to secure a place in the quarter-finals. In the new ‘Duel’ quarter final, Sam competed against fellow Englishman Jake Dennis in the Avalanche Andretti before he was eliminated. In Formula E’s third night race, Sam fought with the ROKiT Venturi of Lucas Di Grassi and the Porsche of André Lotterer throughout demonstrating his great defending skills to bring his Jaguar I-TYPE 5 home in fourth.

Mitch Evans, had a strong start in Qualifying Group A but the session ended under a yellow flag when Edoardo Mortara crashed at the first corner. Evans was unable to set a competitive second qualifying lap time and lined up on the grid in fourteenth. The Kiwi made decisive overtakes throughout the race and showed the speed of the Jaguar I-TYPE 5 by gaining four places and securing the final point scoring position. Mitch also achieved his first FANBOOST of the season – voted by fans online.